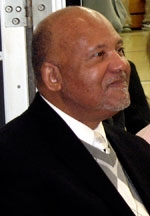 “The L.I.F.T. Foundation (founded by Bob and Susan Kozlowski) is a perfect example of how two individuals can positively impact the lives of others. Bob and Susan unselfishly gave their time to help students and teachers in two of our district’s high poverty schools. They quickly became an integral part of the school communities and were fully embraced by the students and the faculty. During Bob and Susan’s visits to the schools, they provided tutoring and mentoring for students helping them to bridge the gap between what they lacked socially and academically. Students were not judged by Mr. and Mrs. Kozlowski because of their limited resources but instead they were always motivated and encouraged to succeed in spite of their circumstances.

As I reflect upon the great partnership that MSD Pike has had with Bob and Susan, I am reminded of this quote: “Think about the people you respect and admire the most. Aren’t they the ones who have given the most?”

In summary, the journey began with Bob and Susan and it continues with the both of them. Bob’s spirit is smiling because his wife Susan is still carrying out their mission to help disadvantaged youth achieve academic success.”

“The LIFT Foundation Scholarship Program has made a significant impact in the lives of the students selected from Pike High School. Robert and Susan Kozlowski established this wonderful opportunity in the fall of 2008. The first recipients are now successful juniors in college!

Through the continued efforts of Susan Kozlowski, the LIFT scholarships have provided financial support for students who might not have had the resources to go on to post-secondary institutions. In addition, Susan has personally enriched the lives of the students through her role as a mentor. The nurturing and encouragement that she provides and her tenacious attention to supporting the ongoing success of the students as they pursue their degrees is immeasurable.

We certainly appreciate and applaud the mission of the LIFT Foundation. We know it’s ultimate success can only be contributed to the generous spirits of those involved in running the foundation. Their determination to make a difference in the lives of these families is a testament to the enthusiastic efforts of Susan Kozlowski and the magnificent legacy built by Robert Kozlowski.”

“The L.I.F.T. Foundation’s generosity to students at Fishback Creek Public Academy include:

A subscription to Bookflix — a new online literacy resource that strives to build a love of reading and learning. Now, students who have limited access to books at home are able to bring books home to read — they can even carry them with the book totes that the foundation provided.

‘None of this would have been possible without the L.I.F.T. Foundation’s gracious and generous grants.'”