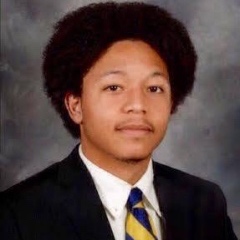 Mario Villaneda has lived most of his life with the support of welfare and looks to the day a college education will allow him to help provide for his family and himself.  His mother and father have provided a loving, supportive home environment for him, always prioritizing his education.  From an early age he internalized that he must do his part.  He would stay afterschool to complete projects because there were no materials at home.  He would do his homework in a hospital for weeks at a time, so his mom could visit his ill grandparent.  Although gang members filled his apartment complex and neighborhood, he was very aware that his parents kept him safe from such influences.  In turn, he made the right choices.

In high school Mario played football, taking on the role of team captain his senior year. He exemplifies integrity, hard work, and an acceptance of others by the way he lives each day. Mario volunteered on AIDS walks, blood and canned food drives, and was a member of the service organization Hope Club.  The importance of giving back is just a part of what makes Mario special.  He is open and makes friends easily.  The respect he shows those around him is reflected back on him. In addition to school altruistic acts he also took on jobs assisting in a daycare and at a camp close to his home.

“Once I accomplish my goal of graduating from college… career journalism… I want to be a voice of my community… participate in events in Los Angeles schools, inspiring them to achieve greatness… people listen to those who have been in their shoes. I am a real life example…”

Mario is thrilled to start his college career at San Jose State University as a journalism major.  He looks forward to being close to San Francisco and exploring a world so far from the only home he has ever known.