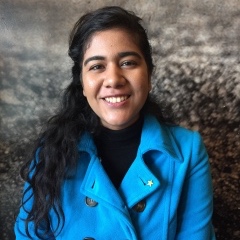 When Emily was first asked to describe herself as a senior applying to be a L.I.F.T. Scholar she described herself in four words “… I am a survivor, a leader, a thinker, a matriarch…. who at ten years old felt the cold barrel of a shotgun…” at her head at the hands of her father.  Rather than let the struggles of her life define her, Emily has excelled academically believing with all her being that ” … I will be able to break the chains of poverty that have bonded generations of my people — I want to have the freedom to fully develop my talents and pursue my passions…” through an education.  Although often feeling like she was an island among the chaos of her personal life, when she went to school she could be the leaders she read about and admired who empowered themselves and advocated for the freedom and equality they deserved “… FrederickDouglas, Lucy Stone, Malcolm X”.

Emily spent her four years in high school, although moving among more than one school, in ROTC where she was a Battalion Commander and All-City Deputy Colonel, which is the second highest position in all of Los Angeles!   The role required leadership, discipline, hard work and an inner sense of honor and pride.  These qualities were evident upon meeting this young woman.  There is an immediate sense of quiet respect for others and herself.  She knows the weight of her mission and carries it with pride.  Emily sees herself as role model for her three younger siblings and the community of “the hood” she grew up in.  “Almost every decision in my lifetime can be attributed to my childhood…. I want to know the link between government in the hood world and the government in the polished world of those suit-and-tie clad politicians…”.

At U.C. Berkeley Emily has embraced the academic life, as she explores the subject matters that will allow her to make her dreams come true.  Presently she is an economics major with a minor in education, knowing that in some capacity she wants to pursue education.

“I believe the essence of L.I.F.T. is that learning liberates not only the student, but the world as a whole… one of my core philosophies that education is not an individual’s intellectual property, but rather belongs to all of humankind… individual’s responsibility to use that education for the bettering of the world…”