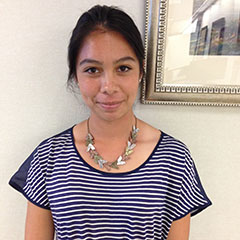 Daisy Cortez has a smile that draws you to find out more as soon as you meet her.  She was born in the United States, but at one years old moved back to the small rural town in Mexico where her parents grew up.  Ranching was the family’s livelihood.  Both her parents did not have beyond a sixth grade education, needing to help support the family.  Returning to the United States as a young girl of five, Daisy already was inspired by their strong work ethic, but also knew education would provide the freedom of her dreams.

“College has always been part of my goals.  I am the oldest of three… looked upon as their role model… I am a girl that is not satisfied with reaching one goal. I have dreams of many… I grew up among humble people who were not educated and at the most completed sixth grade… their values of working hard have inspired me…”

Daisy dedicated herself to academic excellence.  During high school she was accepted to College Match, spending weekends doing SAT Prep and having the opportunity to visit college campuses across the country.    She also followed her passion to help her community as co-president of the Interactive Club and a member of the Rotary Interact Club.  Daisy is also athletic, joining the track team and taking the leadership role of captain her senior year.

Each experience has motived Daisy to be the best she can be.  She understands that leadership requires commitment and working with others to achieve a common goal makes a difference.  Daisy is attending the College of St. Benedict in Minnesota the fall of 2014 on an academic scholarship, along with the L.I.F.T. Foundation Scholarship.  She will be far from the world of Maywood, California and the homogeneous ethnic community of her youth.  She looks forward to possibly joining the crew team and experiencing all that only a college education can afford.