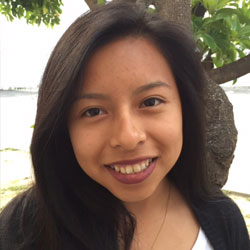 At the age of eleven, Claudia became an adult caring for her two younger siblings and her Grandmother “from the moment they woke up to the minute they fall asleep…” serving dinner to her father at 10pm and rarely seeing her Mother after work. As a young child she grew up in a small store in downtown Los Angeles selling undergarments and baby gifts alongside her parents. The store and home were lost and “I learned solitude… wished for someone to be there and that person came into my life in a strange way.” Walking home from school alone she met a boy who would forever change her life and who lives on in her successes and dreams.

Claudia found a best friend to trust and lose her solitude in his friendship, as she was there to be his voice when he felt darkness. Tragically the pain he felt was too great and he “passed away the summer before high school”. She blamed herself for not doing more, yet there was no more she could do. “Education became an avenue towards recuperation… I began applying to internships, improving my grades, learning everything I need for college… going to tutoring everyday.” All the while she still remained a parent figure to her siblings until the day she became their role model, symbolizing what can be!

Claudia is a college student at her dream school, U.C. Berkeley majoring in psychology with plans to go to medical school one day. Through volunteerism at a hospital she found the powerful drive to achieve, “seeing patients, nurses, and doctors… I found a home and a shelter… working in the medical field was an endless chain of happiness… I want to help the Claudia’s of the world who are alone… the friends of the world who are abused and alone and homeless and scared…”