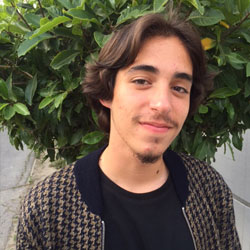 Failing two grades in junior high school, Chris was on the road to academic failure, believing he would follow the fate of “all the men in my family”, working in the unstable field of construction. He spent his young life constantly getting in trouble, moving between his grandparents, dad, stepfather and aunts places as his mom tried to find a job and stability for her sons. She was a teen mom herself, knowing the hardships one faces with a minimal education. No matter the struggle she always tried to instill in Chris the importance of an education. His mom believed in him before he did himself.

Chris started high school in a new school with a mom for the first time working a new job and having some financial security. Here the story of Chris, the college student at U.C. Berkeley in the Department of Film and Media, begins. Starting in 9th grade, he went for afterschool tutoring knowing he was far behind his peers. “I learned how to be a student again after opting out.” His passion for skateboarding became a motivator to achieve as he started to dream of a future combining his love for skateboarding with his passions for photography and cinema. He realized he had to develop the whole person to be happy and successful and made a plan to join clubs, academic and non-academic activities and sore!

“Learning serves as a gateway to freedom and betterment of one’s life… a career of my choice and the complete freedom to choose…” Chris now is a role model for his younger brother and others in his skating community and neighborhood talking to young people, showing through actions that with determination, hard work, and passion they too can achieve and make dreams come true. Chris has found that there is a world beyond instability and poor choices, if one reaches beyond fear and complacency to achieve greatness.