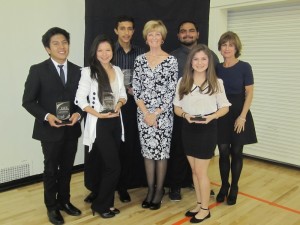 Mrs. Kozlowski toured Granada Hills Charter High School in the spring of 2013 and was most impressed with the students she met, who were articulate, intelligent, and enthusiastic about their future goals. Although plans were to start the scholarship program during the 2013-2014 academic year, she could not miss the opportunity to offer this class of deserving seniors an opportunity to become L.I.F.T. Scholars. With the generous donation of 1inMM Productions, scholarship opportunities multiplied to a selection of these five seniors. Each went through a rigorous interview, application and multi-essay screening process.

On May 23rd Majde, Hiro, Noe, Leslie, and Elmer were awarded The Robert and Susan Kozlowski L.I.F.T. Scholarships at Granada Hills Charter High School Senior Awards Night before cheering family, peers, teachers, and administrators. Susan Kozlowski made the presentations, with L.I.F.T. scholarship committee volunteer Francine Lehner. Both Mrs. Kozlowski and Mrs. Lehner were themselves graduates of Granada Hills High School, so the coming home was that much more meaningful. Mrs. Kozlowski looks forward to the next four years, as she mentors each new L.I.F.T. Scholar, an outstanding, proud group of college bound young people.